On not remembering Apollo 11

The tributes to Neil Armstrong have been remarkable. His self-effacing and courageous character has shone through in what's been said and written. There is something immense compelling in a universally known hero always apparently describing himself as 'a nerdy engineer.'
﻿
Prompted by all the news items, I've tried to remember that amazing day in July 1969 when Armstrong stepped on the moon. So many people have recounted how moved they were at the time by the grainy TV pictures. Indeed, not a small number have said how that moment was a personal turning point - an astrophysicist interviewed on the radio gave moving testimony to Armstrong's first step as being her childhood first step towards her career. All the more disconcerting then that I have no recollection from the time of that famous first step.

Of course I have images in my mind of the landing craft ladder and Armstrong stepping from it, of footsteps in the lunar dust, and the stars and stripes waving against a black space and bare lunar landscape, but they are images from oft repeated public display. I have no recollection whatsoever of seeing them for the first time on that fateful day. I suppose I must have seen them then - as a family we watched the television news every day - but I can't remember having done so.

Apparently this makes me something of an oddity. Amongst those old enough to remember 1969, just about every seems to have some memory of the day of the first step on the moon. After all 'What were you doing the day that such and such a famous thing happened?' is a frequent conversational gambit whenever personal memories are talked about.

It's not that I wasn't interested. As a child I was an avid reader of The Children's Newspaper and The Eagle, so science, space and technology were part of my everyday enthusiasms. I was mid-way through secondary school in 1969 and was well aware of the significance of the event - politically as well scientifically. But for some reason a memory of the day itself escapes me.

I know enough of what happened that day to reconstruct it as if it were a memory. Like everyone else I'm familiar with the TV shots of the actual event, and that weekend was the first one of the long school holiday that year. I know what I was likely to have been doing, where I lived at the time, and where and how I was likley to have watched the news report. It would be easy to create 'a memory' of that day, but it would not be a genuine recollection. Interestingly if I did so, I might well come to believe over time that what I had made up was a genuine memory. I can't be absolutely sure of how many of my 'genuine memories' I have actually constructed in just such a way. That one of the really disconcerting things about memory.

I also ask myself why I don't remember anything of the Apollo 11 moon landing. Other days of that decade I remember with great clarity - Winston Churchill's funeral, for example. Is it that something else that was particularly significant was going on in my life at the same time and has obscured my memory of the much talked about moon landing? Maybe that is the case, although I can't actually remember what it might have been. For sure my teenager years were emotionally turbulent - as they are for so many people - so perhaps others things got in the way of my remembering. I just don't know.

My not remembering the Apollo 11 landing illustrates how plastic memory is. Memory is always something we construct and not simply retrieval of pre-existent, pre-formed files. It's a disarming fact that memory making is often as easy as forgetting.
Posted by Christopher Burkett at 13:32 No comments: 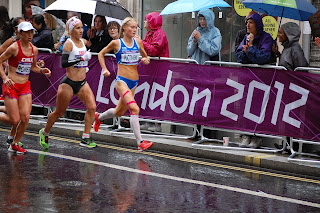 Like so many people I guess I've got a touch of post-Olympic blues. So inspiring and encompassing were the games that I'm now missing them terribly. Of course I couldn't have kept up my level of engagement indefinitely - I was able to have my holidays at the games and every holiday has to end! Having enjoyed the Olympics so much my mind turns to what I as a preacher might take from those high days. I think especially about the competitors themselves:
Olympian preaching is perhaps a metaphor worth pondering. Roll on the Paralympics!
Posted by Christopher Burkett at 09:33 No comments: