Somebody said to me the other day that people carrying billboard advertisements is a thing of the past. Perhaps the speaker was right and maybe the minimum wage has something to do with the demise of such living adverts. Or is it that they've been replaced by the designer packaging and giveaway bags that we the customers now carry for free! I know someone who always refuses wrapping and free bags precisely because he refuses to be a free advertisement. The unprinted brown carrier-bag also seems to be a thing of the past. I was musing on these things when a friend showed me this: 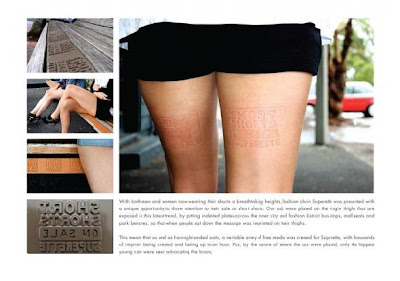 Anyone wearing short shorts who sits on these particular benches in Auckland, New Zealand walks on with an ad for a store called Superette's sale of short shorts imprinted on their legs - at least temporarily.
Saint Paul said we carry everywhere in our person the death of Christ, so that the life of Christ may also be manifested in us. I'm tempted to change that 'in our person' to 'in and on our person'. Isn't he suggesting that we should be ourselves 'adverts' for Christ. I appreciate Paul couldn't have had in his mind the techniques of modern marketting, nevertheless surely he meant us to show Christ in all kinds of ways. Sharing the Christian memory requires making it obvious that we are holding something worth sharing. It isn't meant to be all 'inside,' only a matter of subjective ideas, values and feelings. It's also about what other people can see us carrying.
Collective memory mechanism:
Bodily things are important. Shared objects, actions, and places keep the memory living.
Posted by Christopher Burkett at 15:34 No comments:

Sermon for Easter 6: An Example.

There's no one as Irish as Barack O'Bama.

Infectious joy is the only way to described President Obama's reception in Ireland today. As strange as it may seem, this was seen by everyone as a homecoming.  Alongside his well-known Hawaian and Kenyan roots the President stood with some 40 million other Irish-Americans and proudly claimed his Irish ancestry.
How that ancestry was proven is a remarkable tale in itself.  Genealogists had been working on Obama's ancestry during the election campaign.  They had uncovered the fact that the would-be-president's great-great-grandmother had an Irish immigrant father, one Fulmouth Kearney, who arrived in New York on 20th March 1850 from Moneygall, Co Offaly, but there the documentary trail went cold. It took the Church of Ireland Rector of Cloughjordan in Co. Tipperary, Canon Stephen Neill, to find the missing evidence.  The church records of Templeharry near Moneygall had been in the care of its Treasurer, Elizabeth Shortt, who died in 2007.  Fortunately her son kept the old books his mother had looked after for so long, and it was in these faded volumes that the Rector found incontrovertible proof of the Fulmouth Kearney connection and more.  It turns out that Kearney family members had in fact been in America since the 1790s with different individuals emigrating there over the course of several generations.
So as the song goes, 'There's no one as Irish as Barack O'Bama,' and the President can justifiably claim to be recovering an Irish apostrophe lost somewhere along the way!  And yet we may wonder whether there's much actual content to that remembering of an Irish ancestry.  Is it really anything more than a curious fact about the past? 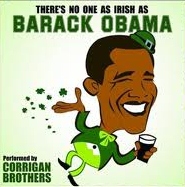 My answer has to be that it is indeed more than just a curiosity.  The 'Irish connection' reinforces again the President's credentials as a real American - an inheritor of that proud tradition of immigrants who against all the odds built a new land and an identity for themselves.  In that way this old lineage serves a very present purpose.  The rather improbable way these connections were discovered only serves to reinforce the romance of it all.  This remembering touches hearts, enhances reputation, and reinforces common ideals expressed in the person of President Obama.

Posted by Christopher Burkett at 20:42 No comments: 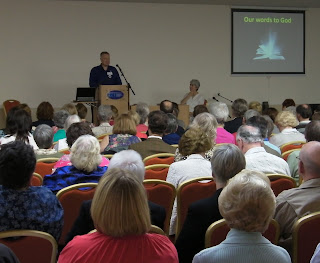 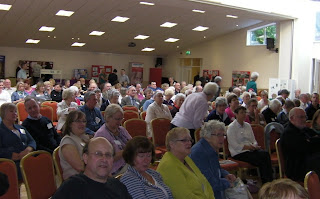 Many thanks to all those who contributed so positively to the workshops mentioned in my last blog. There was a great 'buzz' at the conference of which they were a part.  It was a memorable forty-eight hours for the two hundred or so people who took part.  Hopefully participants will have been able to talk about it at length on their journeys home.  Some will meet to see how the ideas discussed can be taken further in their own congregations and localities.  Others will be busy on articles about the conference for church magazines. And others will be following-up for themselves things to do as a consequence of their attendance.  But all of us will be conscious that our memory of the content of the sessions we've enjoyed together is already waning.  Talking about the conference, meeting others who attended, and trying to describe the experience to people who didn't attend will all help to slow down that decay of memories, but as those social interactions become less frequent and more distant from the event the recall becomes more difficult.  The group which created the memories (the conference gathering) is no more and our memories of it are dependent on meaningful recall of it in groups of people that share its significance.  That's the heart of what collective memory means.  Gathering, talking, sharing, and acting together is an essential aspect of memory.

Making it memorable: preaching the Bible in forgetful times.

This weekend I'm leading a couple of workshops on collective memory and preaching.  This is the handout for those sessions.  I intend to amplify some of the points in future blogs: 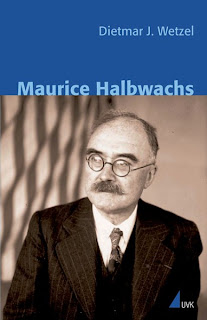 Maurice Halbwachs (11 March 1877 - 16 March 1945), the French philosopher and sociologist who was the originator of the concept of
collective memory.
Remembering is not just recall.  We remember by communicating with one another.
Remembering is a process of organising and structure.
Memories are ordered in relationship to the epochs of our lives.
Social belonging determines what is memorable.

Memories are ‘situated/located’ in specific groups and specific places and times.
Some of what we remember we haven’t experienced but we remember it because it is important to the group to which we belong.
Remembering always serves the present.

His disciples did not understand these things at first; but when Jesus was glorified, then they remembered that these things had been written of him and had been done to him.
John 12.16

Memories are therefore held together by participation.
Western culture is ‘a culture of amnesia’ (Andreas Huyssen).
For the Christian faith ours are forgetful times.  If participation is an essential component of remembering, how is the faith memory to be maintained without participation?  It is as if the links in our chains of memory are corroding and getting ever thinner.  Perhaps some of the links are already broken (Danièle Hervieu-Léger)
Every Christian gathering is a mnemonic event.  We remember we are remembered by God.
Preaching in an amnesic society [three ‘Is’ and three ‘Ps’]:
Posted by Christopher Burkett at 07:48 No comments: