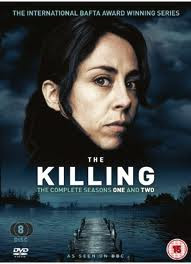 I’m one of the millions of fans of Sarah Lund – the uncompromising, uncommunicative, and unsocial detective who leads in the hugely successful Danish TV show The Killing. Despite subtitles, plots elongated beyond any comparable crime drama, and the relentlessly gloomy weather of its settings, The Killing has found global success. In the UK audience appreciation figures have been phenomenal with the show often acknowledged as ‘the best thing on TV’; extraordinary for a show that on the face of it is far from easy, casual watching.


A recent BBC interview with Sofie Gråbøl, the actor who places Sarah Lund, gives some clues (!) to the show’s appeal. She says it isn’t a meal where all the dishes are served at once. Instead, things are served up in a slow and incremental way that demands the imaginative attention of the viewer. The audience isn’t allowed to be passive as this holding things back demands co-creation on the part of the viewer. Significant details emerge through time and have to be remembered. One crime is the focus; presented in 20 episodes where each is a day in the investigation. Famously, even the actors don’t know ‘whodunnit’ as the programmes are being filmed as scripts are written as the story unfolds.


There’s a lot here any preacher or speaker should think about. Perhaps it isn’t always necessary to serve up all the words at once, as it were. It’s just too easy for preachers to fall into the trap of making every sermon encompass ‘God, the universe, and everything.’ Important subjects can connect in a much more piecemeal way, if there’s an evident suspenseful and engaging development in what’s said. The audience will stay with it, even for very long periods (20 episodes), if imaginations are being stirred and mental concentration is provoked. In fact, people like to put this brain effort in – it’s enjoyable and satisfying. The blindingly obvious served up in a tedious stew of words neither satisfies nor encourages. Engaging the minds, imaginations and hearts of the audience is the clear priority. Surely that’s the aim of every preacher too? Let’s say it like Sarah Lund.
Posted by Christopher Burkett at 10:02