The Romans are in town. Temporarily at least. This weekend in Chester's Grosvenor Park and the excavated ruins of the nearby amphitheatre are occupied by a Roman Legion and a hoard of camp-followers. Gladiatorial games have returned to the arena outside the walls of the Legion's ancient fort of Deva. 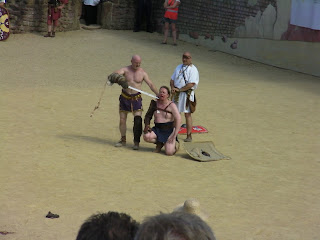 All great fun. A couple of thousand spectators looked-on yesterday afternoon as the gladiators did their stuff. They, and all the other enactors, had taken great care to appear absolutely authentic: handmade shoes, tools and weapons, no synthetic fibres in any of the clothes or the tents, and craftsmen plying their skills 'as in the times of the Roman empire.' But yesterday was a very hot day and I saw several legionaires and gladiators swigging water from decidedly twenty-first century plastic bottles! Historical authenticity only goes so far before another kind of authenticity takes over. What was going on in the arena was explained via a public address system, and modern health and safety requirements were applied as at any other event. The combat was recorded on upteen digital cameras and phones, and no gladiator was actually injured.
The boundaries between different authenticities were crossed again and again. And without explanation those of us watching understood the rules that applied and participated appropriately. Yes, the crowd bellowed for death or mercy, mimicking  what we imagined those who stood on the same spot so many centuries before had done. 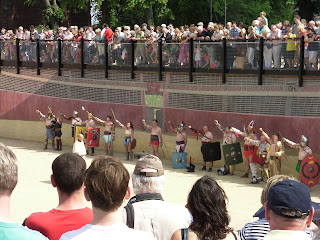 Authenticity is something preachers need to keep constantly in mind. The words of a sermon are discredited if they strike the hearers as not-authentic. And yet preachers can and should speak from beyond their own experience. Preachers imaginatively construct possibilities beyond the mundane. They take the risk of stretching an account of the worldly so far that it encompasses eternity. Listeners need to be able to recognize the transition points between different authenticities, and it's the preacher responsibility to provide them. Preachers do this not to entertain, but to facilitate glimpses of God's reality made real and present in Christ. That means the language, tone, style and content needs to up to the task of conveying what's authentic. Part of a preacher's role is to trust the congregation to know what authenticity is operating at each part of the sermon event.
Posted by Christopher Burkett at 13:01